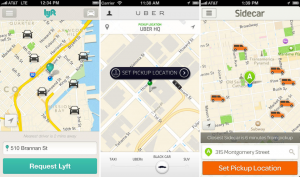 The American company Uber has been all over the news in Belgium over the last three weeks. Uber connects passengers with drivers of vehicles for ride-sharing services; it appears therefore as a typical two-sided platform. As Evans (2011) explains it, a business opportunity emerges for a two-sided (or multi-sided) platform when three conditions are met:

Uber meets the three conditions. First, the two groups are passengers and drivers. Second, indirect network effects are clearly present; as one can read on Uber website:

By seamlessly connecting riders to drivers through our apps, we make cities more accessible, opening up more possibilities for riders and more business for drivers.

Finally, drivers and passengers would have a hard time to find each other if they could not use the Uber app on their smartphone. Uber made the headlines in Belgium recently because it first launched its service (UberPOP) in Brussels, then was requested to stop this service by the Brussels authorities, and finally counterattacked by modifying its offering and by making it freely accessible for one week. To justify its decision, the Brussels government invoked the fact that Uber service is illegal because it violates several regulations (the drivers do not pass any exam, they do not follow the tariffs and vehicles do not exhibit the required marks). Brussels is by far not the only city in the world where Uber is in conflict with the regulators (Seattle just added its name to the list today); and the same goes for similar peer-to-peer transport platforms such as Lyft, Sidecar, or Turo. One can easily understand that taxi drivers feel threatened by these new business models, which make it possible for you and me to compete with them. It is thus logical that they lobby their local authorities to have these services shut down. One can also understand that regulators take sides with taxi drivers, not only because a taxi strike is a nuisance that any reasonable city council is glad to avoid, but more importantly because these platforms are relatively new and it is therefore not clear whether they correctly protect the interests of all the parties involved (passengers and drivers). In an excellent piece recently published in the Economix column of the New York Times, Arun Sundararajan explains that the current misalignment between newer peer-to-peer business models and older regulations is dangerous because it may impede economic growth.

This is unfortunate, because the emerging peer-to-peer, collaborative “sharing economy” will be a significant segment of the country’s future economic activity, stimulating new consumption, raising productivity and catalyzing individual innovation and entrepreneurship.

In the face of this “regulatory conundrum”, Arun Sundararajan recommends a combination of self-regulatory measures taken by the platforms themselves and some redesigned government oversight:

The solution is to delegate more regulatory responsibility to the marketplaces and platforms while preserving some government oversight, by creating new self-regulatory organizations like those that have succeeded in other markets and industries. (…) the government should recognize that the new peer-to-peer marketplaces have sophisticated controls naturally built in. (…) The platforms have voluntarily adopted additional nondigital safeguards. (…) Self-policing isn’t a universal panacea. We’ll still need government mandates to prevent effects like congestion, or for, say, providing accessible vehicles and ensuring disaster preparedness — things that markets don’t easily self-provide.

I fully subscribe to this view (and, apparently, so does the State of California as it is the first State that made peer-to-peer transport services legal under a dedicated regulatory framework). As noted above, Uber and the other peer-to-peer transport services are typical examples of two-sided platforms. I have already explained in a previous post that

On such platforms, intermediaries have to design various strategies to induce agents on both sides to participate. This might be tricky because of the “chicken-and-egg” problem that pesters all these platforms: to attract one group, you need to attract the other one, but were should you start?

A first role of these platforms as intermediaries is thus to act as platform operators by providing a platform where passengers and drivers are able to interact. Yet, a precondition for having both sides on board is that they can trust each other, which is far from obvious in the presence of asymmetric information. Hence, the intermediaries must also play the role of trusted third-parties; that is, Uber, Lyft, Sidecar and the likes must act as certification agents, mainly by revealing information about the drivers’ reliability or quality. They do so through reputation systems and active supplier screening; another cooperative initiative in this direction is the Peer-to-Peer Rideshare Insurance Coalition, which aims “to build a foundation of insurance best practices, policies and information for P2P Ridesharing.”

If they want to be considered as trusted intermediaries, platforms have to become bearers of reputation and effectively certify the quality and reliability of the drivers that they take on board. It is indeed in the platforms’ best interest to screen drivers carefully so as to keep only the high-quality ones. Why? Because a driver selected by the platform is believed to be of high quality by a passenger unless she previously experienced low quality of some other driver contacted through the platform. Hence, to avoid any stain on its reputation, the platform will directly discontinue the operation of low quality drivers. Understanding that, drivers do not find it profitable to provide a low quality service, implying that only high quality services are eventually provided on the platform. In a nutshell, the platform can be trusted simply because it suffices to have one rotten apple in the bag to spoil the rest of them in no time, something that a two-sided platform simply cannot afford. As many Internet-based platforms share this problem of establishing trust, I would like you to find and discuss some specific mechanisms that they put in place in order to achieve this goal.